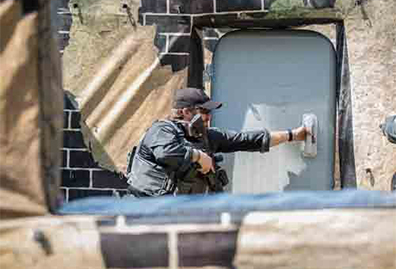 Survitec has introduced its Inflatable Walls Training System (IWTS) to the European military and law enforcement communities for the first time since finalising a milestone licencing agreement.

After significant uptake in the United States, IWTS was presented to European civil defence and security leaders at Enforce Tac in Nürnberg, Germany in March. Interest in the product was so great that Survitec is now taking the walls on a year-long European roadshow that will take in ten or more countries.

Based on Survitec’s industry-leading inflatable technology, IWTS is used to create temporary structures for use in training exercises to simulate the built environments that civil and defence forces operate in.

Since becoming the exclusive licensee for this product in 2018, Survitec has focussed its efforts on the US civil protection market with IWTS now being used in a number of police training facilities. Other recent significant contracts include the U.S. Air Force along with security forces across the USA, Europe and Asia Pacific.

The flatpack design and easy storage and transport of the walls makes IWTS ideally suited to military and law enforcement use as it can be deployed wherever a unit is based and reconfigured to create different layouts. In addition, the Inflatable Walls can withstand all non-lethal training ordnance allowing armed forces to convert their own weapons to ensure maximum realism with minimal user intervention and organisational cost. IWTS is the only inflatable “shoot house” system to be approved for use with General Dynamics Simunition® marking and non-marking ammunition, for force-on-force short range training.

IWTS has already gained traction for use in military scenarios, with walls currently in use in the British Army and Royal Air Force, Australian Army and Austrian army. Civil applications include police forces in Switzerland, Germany, Italy and Hong Kong.

David Stelling, IWTS Category Manager, Survitec said: “Being unfamiliar with the layout of a building or urban area that personnel are faced with in a real-world combat, active shooter or hostage situation is a real concern for the individuals involved. Developing tactics ahead of incursion are often addressed through the creation of a simulation of the threat area, using boards and bricks or other difficult-to-configure materials to create a layout or floor plan. This can be a time-consuming and expensive activity. Survitec’s IWTS offers a rapidly deployed and economic solution to the challenge of providing a reality-based environment in which to train.”

Every room, corridor, entrance, exit and window can be recreated so that when operators face the actual structure, they already have the appropriate knowledge to make the correct tactical decisions.

IWTS comprises five basic shapes which can be configured to create unlimited layouts. All wall assemblies are available individually however there are six standard configurations – three geared towards law enforcement and three for military which represent excellent value for money that can be added to over time as funding allows.

Each wall section inflates in approximately 90 seconds and a simple two- or three-room layout can be created in less than 20 minutes with a substantial 2000m2 layout taking just two hours or less depending on the number of personnel.

Capability can be further enhanced with a breach door module and roof system for low light and smoke containment.

A UK military user of the system said: “I’m not aware of any other product that could have been used, or deployed in the short time frame that was required.”

The waterproof, UV-resistant fabric enables the walls to be deployed in all environments and in the past have been used for training in car parks, garages, fields and warehouses. They could also be deployed on a ship if required.

The walls are made from a rubber internal air bladder and tough vinyl outer skin and are currently manufactured in Survitec’s Dunmurry site in Northern Ireland, UK

Survitec entered into an exclusive licencing agreement for IWTS in early 2018 with Battlefield Sim Limited, a UK registered company and has achieved substantial revenues within the year of the agreement.