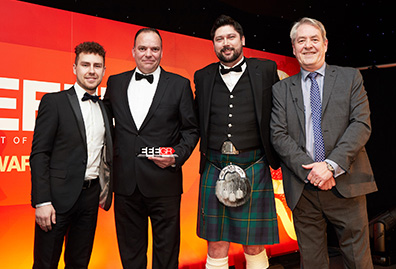 Safety and survival solutions specialists, Survitec, won the EEEGR Award in the Offshore Wind category for the Evacuator system - an emergency wind turbine descent system which the judging panel recognised as representing “a significant contribution” to renewable energy safety.

Simon Gray EEEGR CEO, commented: “We’re very pleased to award Survitec and Evacuator Worldwide the EEEGR Offshore Wind award for the pioneering Evacuator Emergency Descent System. Their collaborative effort demonstrates their commitment to increase the safety of those working within the offshore energy sector and it’s great to have both companies with us as EEEGR members.”

Baba Devani, Survitec Marine CEO, said: “We are absolutely delighted to win this prestigious award, which we accept on behalf of Evacuator’s inventors Eugene Verstegen and Joris Veeger from the Netherlands.

“With the UK set to more than double its total offshore wind power capacity by 2030, the safety of those installing, maintaining and servicing offshore wind turbines is crucial. This award recognises Evacuator’s capacity to keep offshore wind farm workers safe.”

On being informed of the win, Mr. Verstegen, co-owner of Evacuator Worldwide, said: “Winning this award so soon after Evacuator’s market introduction illustrates perfectly the reason behind the decision to partner with Survitec, not only in the UK but on a global basis. Survitec has proven to be the right choice in ensuring that all those working in high-rise marine structures have access to the most optimum means of escape possible.”

Mr Devani added “The Evacuator is the world’s most intuitive and only fire-proof, rapid collective evacuation/descent system. The system, which is fully mechanical, does not require electrical power to operate - which guarantees its operational reliability, whatever the circumstances. Survitec launched this to the offshore energy sector in April this year and it’s great to see that it is quickly becoming recognised as the evacuation system of choice for wind turbine operators.”

“During an emergency every second counts. With wind turbine’s towering over 160m, the safety of personnel is of paramount importance. Having a simple and fire-proof system capable of evacuating personnel rapidly, simply and safely can mean the difference between life or death,” furthered Mr. Verstegen.

Emergency evacuation from offshore wind turbines has usually been by way of rope-based rescue-kits. This slower method is not fire-proof and requires professional abseiling skills. The Evacuator system provides a safer and faster descent, increasing survivability of those that need to escape from heights in an emergency.

Fire-proofed up to 1750°C for 30 minutes, the 2-Reel Evacuator E165, especially designed for wind turbines up to 165 metres, is a fully mechanical evacuation system based on steel cables. This provides a fully automatic emergency descent at a controlled descent-speed of one metre per second - just ‘click on and go’.

Capable of evacuating multiple personnel working at heights up to 300m to safety, personnel can click on each reel at the same time, providing their combined weight does not exceed 282kg per reel. During evacuation two reels can be used at the same time. With a lifespan of more than 30 years, it is easily installed, maintained and comes with accompanying personal protective equipment in an ‘Evacuation Chest’.

The EEEGR Awards, now in their 17th year, celebrate the outstanding achievements and developments that have taken place within the energy sector over the last 12 months. This year’s event reflected the quality, diversity, innovation and flexibility of companies in the energy mix, highlighting the importance of the East of England energy sector to the UK plc. 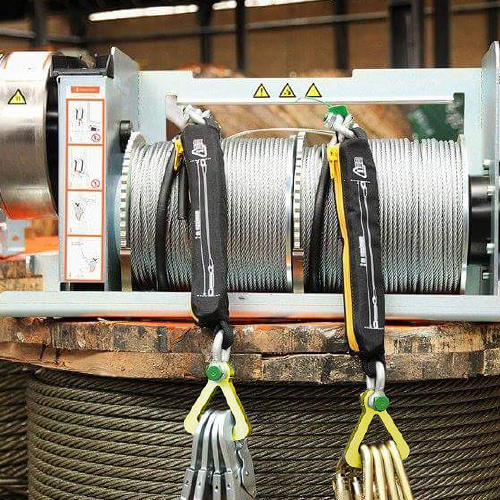