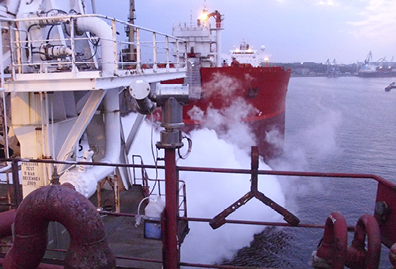 The turn-key CO2 LP lay-up service, developed in collaboration with a leading European-based shipowner, was introduced two-months-ago following market demand for a solution capable of simplifying decommissioning and recommissioning procedures.

Survitec has already seen an upswing in demand for the service following a surge in the number of ships temporarily suspending services and deactivating ships due to the lack of trade.

Claude Sada, Chief Operating Officer, Survitec, said: “Due to the pandemic and the on-going economic uncertainty, we are seeing ro-ro vessels, VLCCs, and large bulk carriers and containerships heading for lay-up, with owners looking to ensure their CO2 systems are deactivated correctly and safely.”

A CO2 LP system, typically used in a vessel’s fixed-fire extinguishing arrangement, can only be decommissioned and recommissioned by a specially trained service provider once the Classification Society has granted approval for the system to be deactivated and the tank emptied.

Steven Puis, Survitec Training Manager, Technical Support, said that while cold lay-up procedures are similar to the processes carried out during the periodical service or refilling of the CO2 system, there are subtle differences.

“In addition to stringent ventilation, gas detection and personnel safety requirements, cooling compressors need to be prepared prior to tank emptying. Once the compressors are safe, the tank must be emptied through the liquid filling line instead of the gas/vapor return line to avoid a rapid drop in pressure and the CO2 turning into a solid block of ice.

“When the tank has been emptied of its liquid content and pressure is maintained at about 10 bar, it avoids the need for any hydro and pressure testing, internal tank cleaning and purging when the system is reactivated. There is no risk of damage caused by humidity or water accumulating inside the tank.”

Jan-Oskar Lid, Survitec’s Global Technical Sales Manager – Fire, Rescue & Safety, furthered: “The CO2 LP system must be emptied prior to lay-up since the ship’s generators will be shut down and unable to provide any power to shipboard compressors and refrigeration units.

“Based on the Survitec deactivation procedures the tank doesn’t have to be opened, inspected, internally cleaned and purged before refilling and reactivation,” he says.

“The safest and most cost-effective way to carry out this work is to move the vessel by tug to a quayside. However, refilling of the CO2 tank at anchorage is possible with good planning and special arrangements, such as a barge, etc.” he says.

With traditional lay-up spots, such as Scotland and Norway, becoming congested with new destinations emerging, Survitec is providing its customers with a list of locations where service engineers with CO2 LP system capability are available. A minimum of two service engineers can be deployed on a case-by-case basis.

“We have the expertise and experience to offer a global turn-key solution from preparation and deactivation through to recommissioning,” said Lid.

With shipowners unprepared for the rapid and extended economic crisis the on-going pandemic has created, the shortfall in trade volumes is resulting a need to protect revenues and scale back operations. For many, a cold lay-up is the best way of reducing overheads.