Survitec’s investment into the new technology is to optimise the safety and chance of survival of helicopter flight crews and passengers wearing lifejackets with the addition of Automatic Identification System (AIS) to track Man Overboard (MOB) casualties more effectively.

The existing AU9-HT PLB, working solely on 121.5MHz, is limited to tracking one casualty at a time, picking up the nearest and strongest signal. However, while still operating on the same frequency, the new ATEX Zone-2 certified sMRT AU10-HTS is capable of showing multiple casualties at the same time due to the added AIS. This allows the search and rescue response to be executed in a more organised and effective manner, keeping the time MOB casualties spend in the water to a minimum.

Ryan Pettit, CEO of Maine Rescue Technologies said: “We have a long, established relationship with Survitec, so are delighted they have partnered with MRT to upgrade their lifejackets with the AU10-HTS. The sMRT product range includes the latest technologies and our equipment is always designed to meet current and future anticipated regulations. The addition of the new PLB within Survitec’s aviation lifejackets forms a comprehensive solution capable of ensuring the wearer has the best chance of survival should the unthinkable happen.”

“Partnering with MRT to introduce its new MOB technology into our existing offering was an easy decision. The upgrade is to support our customers with the most up-to-date technology available and is another example of our commitment to further support the offshore industry” said Ross Wilkinson, Survitec’s Regional Vice President - Northern Europe.

“This, combined with our lifejacket and survival suit technology, provides the end-user with the very best and latest safety equipment to improve their safety when travelling to offshore locations,” Wilkinson adds

Having a sea range over two times greater than that of the existing unit, the flight-approved sMRT AU10-HTS automatically activates after two seconds on immersion in water and tracks survivors to within 10 metres.

GPS data is updated every minute enabling all nearby vessels to assist the MOB incident. Sea to Air range for tracking can be up to 75 miles depending on environmental conditions and height of receiving antenna. As more vessels and aircrafts have visibility of the MOB, casualties chances of survival are significantly increased.

With over 40 years’ experience, MRT is the world’s leading manufacturer of Personal Locator Beacons. Since 2008, MRT has supplied more than 50,000 PLB units to the commercial sector including offshore oil and gas, offshore wind and commercial fishing to name a few. 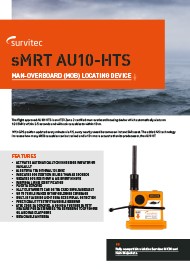