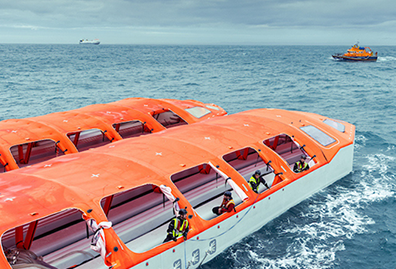 Following the completion of heavy weather sea trials (HWST) in December and Lloyd’s Register Type Approval (A.520) testing in April, Survitec is pleased to share the next major milestone in Seahaven’s journey.

Seahaven, the world’s largest inflatable lifeboat is ready to be installed on your next vessel

Survitec has now received a certificate of compliance, Type Approval, from classification society Lloyd’s Register following the successful completion of extensive mandatory testing earlier this year. This certificate from Lloyd’s Register now signifies all required regulatory testing has been successfully completed and the system can now be installed on cruise ships.

Seahaven is unusual in that it is the first lifeboat to have completed an exhaustive reliability testing programme that far exceeds the testing requirements set out by SOLAS.

Certification not only confirms Seahaven is compliant with IMO’s (International Maritime Organisation) stringent rules for the evacuation of cruise ship passengers and crew, but it offers the cruise industry an alternative to the traditional lifeboat arrangement, leveraging significant revenue generating potential.

Survitec looks forward to working with customers on the adoption of Seahaven on board their next vessels, and together redefining the future of cruise safety.